Benefits of award programs go beyond prizes: deadline for Achievement, Excellence in Ag awards is May 1

Farmers and agricultural professionals who are between the ages of 18 and 35 are encouraged to apply for one of Indiana Farm Bureau’s top awards for younger members: the Achievement and Excellence in Agriculture awards. The application deadline is May 1.

The Achievement Award recognizes outstanding members whose farm management techniques and commitment to their communities set a positive example for others involved in production agriculture.

The Excellence in Agriculture Award recognizes members who do not derive the majority of their income from a production agricultural operation they own but who actively contribute to Farm Bureau and agriculture. 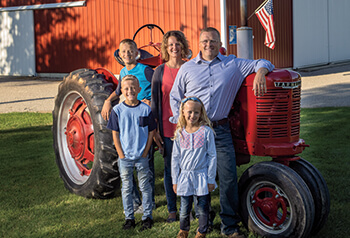 Chris and Marah Steele (pictured left with their children, Carter, Cooper and Mayah - Photo by John S. Otto) won the INFB Excellence in Agriculture Award in 2014.

“I think we would both look back and say that it was the one thing in our career that helped us get to where we are today,” Chris Steele said. “It keeps having ripple effects because of the networking and the friends we’ve made.”

The Steeles own and operate Steele Farms, an agritourism destination in Adams County where they offer a corn maze, pumpkin patch, concession stand, farm market and other activities.

Prior to applying for the Excellence in Agriculture Award, the Steeles were already involved in agritourism, but the contest provided a lot of encouragement.

“The application process set the ball rolling to figure out what we’re doing and why we’re doing it,” he said.

Among the eligibility requirements for both awards are that contestants must be: between 18 and 35 as of Jan. 1, 2019; voting members of Indiana Farm Bureau; and Indiana residents. Prizes include cash, farm equipment and an expense-paid trip to Austin, Texas, in January to compete in the American Farm Bureau Federation contest.

A complete list of the requirements and detailed application instructions are available under Awards and Competitions in the Young Farmers and Ag Professionals section of the INFB website. Prospective applicants also are encouraged to talk to the regional manager for their county. Click here to access the Leadership Directory to search by name, title, county or district.