Draft horses are a team project for Batesville family

Travis Westerfeld’s full-time job is in heating and cooling while his wife, Shari, works in sales for the animal health company Zoetis. But their family business is Westerfeld Belgians – the big and beautiful Belgian draft horses that they raise, show and sell.

“We are mainly a breeding farm. We do all the breeding here on the farm, we foal out the mares and raise the foals until they are ready to show or sell,” Travis Westerfeld said. “We also take our horses to all of the shows around the Midwest – Indiana, Ohio, Michigan and Kentucky.” 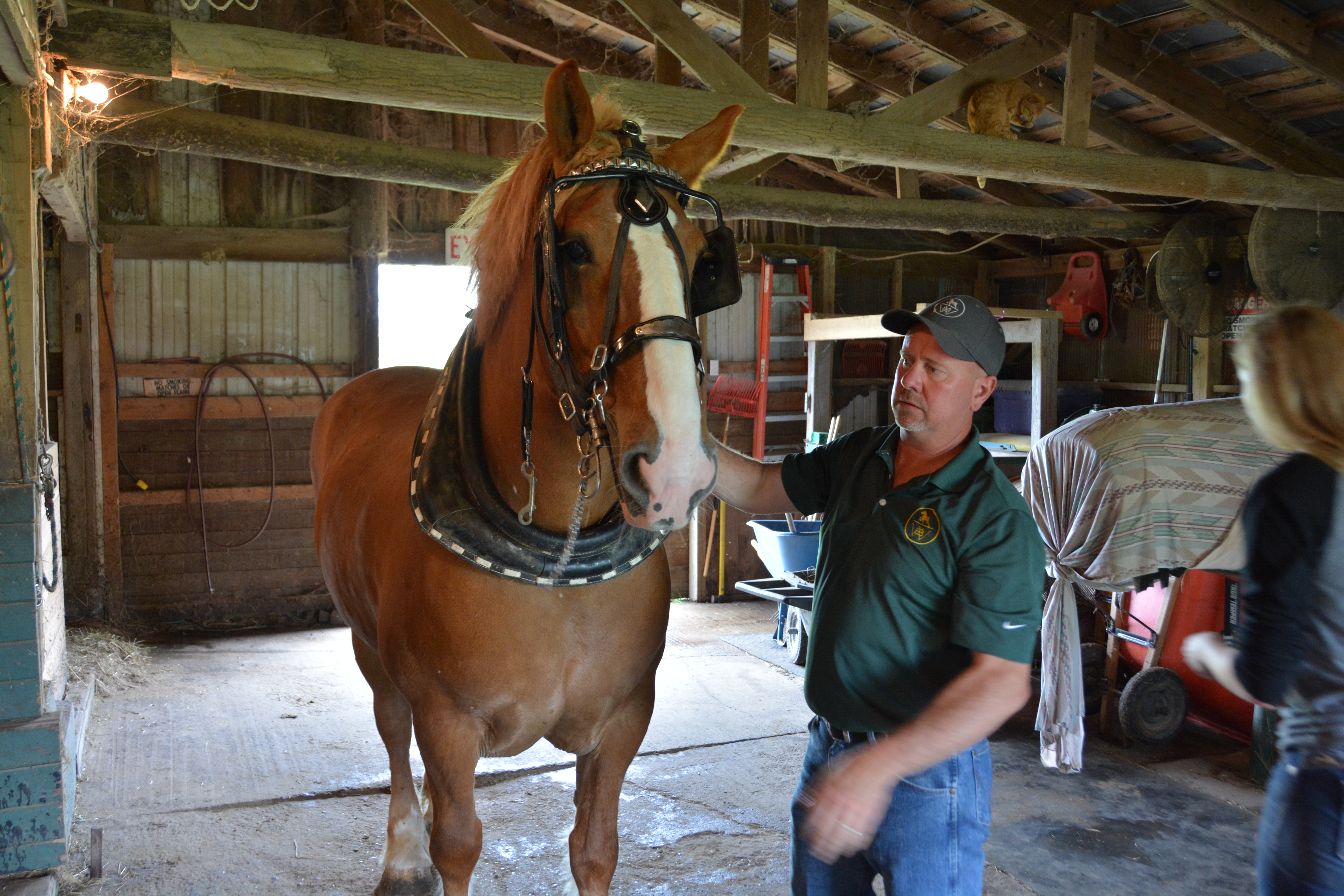 The Westerfelds have 15 Belgians on their Batesville farm, including eight brood mares and two stallions. They also grow hay and row crops.

It’s a real family project: Besides Travis and Shari, Travis’ mother, Joan, and Travis and Shari’s children, Lane, Hattie and Ellie, are all involved in Westerfeld Belgians. In addition, some family friends also pitch in at shows and on the farm.

“Westerfeld Belgians can carry on the family tradition because of the help we get from family and friends,” said Shari Westerfeld. “We rely on good horsemen like Logan Myers, Austin Banga, Travis Fox, Chad Mrosinski and many others who have helped us along the way.”

Show preparation is an elaborate process, and when the crew gets to a show, everybody has a role, Travis explained.

“Our son does a majority of the harnessing, our daughter braids the manes, and my wife, mom and other daughter help fill in with all the other many tasks that are needed to prepare for the show,” he said.

“The kids really enjoy competing in their classes,” he added. “It is the highlight of the shows.”

Westerfeld Belgians started in 1984 when Travis’ great uncle, Howard Westerfeld, sold his Belgians to Travis’ parents, Brian and Joan. Travis and Shari took over the business after Brian’s death in 2013. 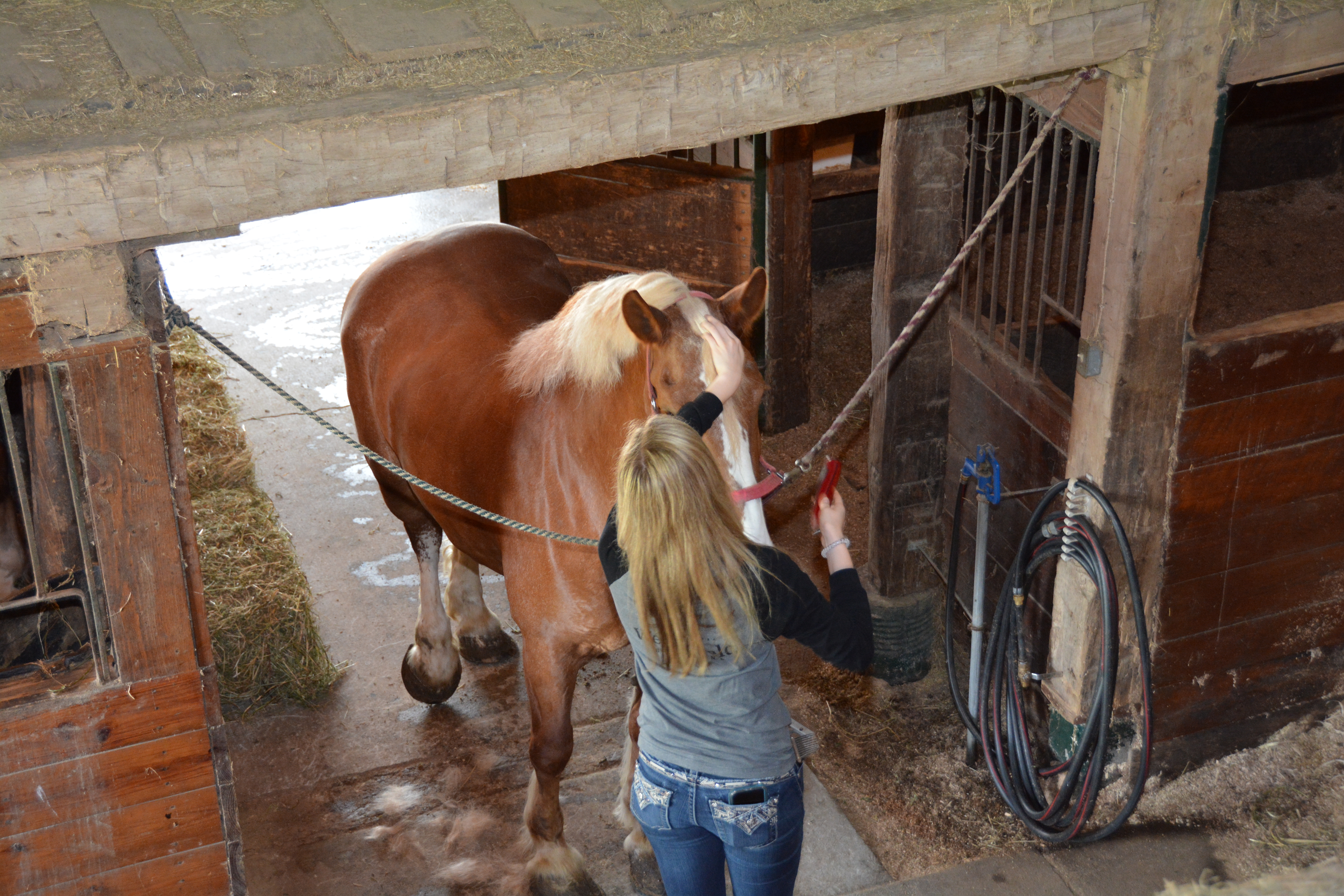 Producing a Belgian is no small endeavor because they are big animals. According to Britannica.com, Belgians average 16 to 17 hands tall (or 64 to 68 inches from the ground to the ridge between the horse's shoulder blades) and weigh 1,800 to 2,200 pounds. In comparison, the American Quarter Horse, which is considered the most common breed in the U.S., averages between 14.3 to 16 hands and from 950 to 1,200 pounds.

But for the Westerfelds, the end product isn’t just a good horse – it’s a good team of horses. The family exhibits draft horse hitches at shows both large and small in Indiana and surrounding states.

On a six-horse hitch, the front horses are called the lead team. “They’re going to have the most style and the most presence, they will really drive with their heads up, and that’s what we want out front,” Travis explained. The middle horses are known as the “swing team,” and their job is to help the six get around the corners. They are generally bigger than the lead team but smaller than the wheel team.

“The wheel team has to be the biggest of all because they’re responsible for pulling, and they steer and stop the wagon,” Travis said.