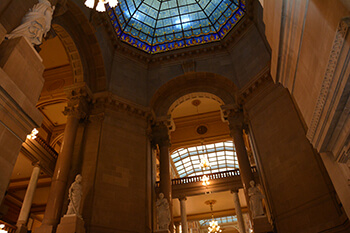 Indiana Farm Bureau and its members have spent a lot of time discussing township government at the Statehouse in the last two years, and according to Justin Schneider, INFB’s director of state government relations, that is not likely to change.

This session, INFB is supporting House Bill 1177, authored by Rep. Cindy Ziemke, R-Batesville. The bill would require a township to prepare a capital improvement plan if township funds exceed 150 percent of the township’s annual budget. If that threshold is hit and the township does not have a capital improvement plan in place, it would be prohibited from collecting property taxes for the following three years. The bill also calls for a study committee to look into the resources and level of preparedness of volunteer fire departments.

“House Bill 1177 makes sense from a transparency standpoint,” said Schneider. “If a township is going to collect taxes and build up those funds to a point significantly over their annual budget, there should be a plan in place, whether it’s buying a new piece of equipment for the fire department or to support programs for assisting those who have fallen on hard times.”

Schneider added that the legislature will likely entertain other township government-related bills in the future. With policy development meetings occurring across the state, he says now is the time for county Farm Bureaus to discuss what makes sense for their areas.

“County Farm Bureaus and our local members should consider what local government structure makes sense for them,” Schneider said. “Township mergers or operating agreements might be viable options, but there needs to be a locally driven process that meets local needs, not a one-size-fits-all approach that doesn’t consider unique, local factors.”