Call to Action: One county’s CFO battles reflected in communities across the state

Up to the last 20 years or so, starting or expanding a livestock operation in Indiana has been generally routine and predictable.

Discussing and planning with family members, consulting technical experts, arranging for financing, obeying laws and regulations, notifying neighbors, filing for a permit – all that should be necessary after taking those steps is a nice, businesslike hearing before the planning and zoning board, right?

Well, no. All too often, getting approval for a livestock operation in Indiana is a messy, contentious business that generates lots of negative emotions, and this is true even though the land involved is zoned agricultural.

If you need proof, take a look at Whitley County. That isn’t by any stretch the only county that has experienced political turbulence related to livestock agriculture. But over the past two years, while at least one Whitley County confined feeding operation permit went through without any significant problems, two have experienced significant challenges. 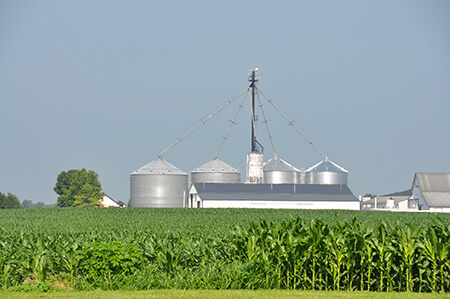 “We’ve been actively working with farmers up there for about two years,” said INFB livestock development specialist Greg Slipher.

A local activist group called Whitley Water Matters has filed the paperwork to become an LLC (or “limited liability company”) interested in the land, lakes, air and waterways in Whitley County and “neighboring communities,” according to one of the organization’s membership flyers. The flyer also specifically states that stopping a “large CAFO” is another of its aims.

“It’s a local problem now, but if this doesn’t get stopped it’s going to be a statewide problem,” said Dane Drew, president of the Whitley County Farm Bureau. Whitley Farmers Matter is the “the ag community coming together,” he added.

The latest livestock controversy – the one mentioned in the flyer above – involves Trish and Todd Hinen, who have applied for a permit from the Indiana Department of Environmental Management to build two 660-head beef cattle “fattening barns.” According to Trish Hinen, the idea is to close down two older barns and move those cattle to the new barns.

“We’ve been raising cattle for 25 years,” she said. “This consolidation allows us to focus our management on two locations.” Besides applying for the necessary permits, the Hinens also sent letters to all property owners within a half-mile radius of the proposed barns, as required by law, and received questions from only one of those neighbors.

But then the “rumbling” started, Hinen said – speculations about this “new cattle operation,” where it would be located, what kind of facility it would be, who was building it, and so on. Almost nobody approached the Hinens directly, she noted.

“We were naïve, I guess,” Hinen said. “We let it go for a while because we thought there’d just be rumbling, rumbling, rumbling – and then it would go away. It took us a while to realize that no, this isn’t going away. This isn’t just a nuisance.”

It was around then that the couple approached Farm Bureau. The Hinens are former members of the State Young Farmer Committee, and Trish is a former county president, so “I was aware of Farm Bureau as a resource.”

Expertise is probably the most important thing Farm Bureau can offer in these cases, said Susan Lawrence, who serves as INFB’s regional manager for Whitley County and several other counties in northeast Indiana.

“Don’t be afraid to ask – ask for expertise, ask for help,” Lawrence said. “I’m not the expert but I can get ahold of the experts. That’s the value of your membership.”

Another thing Farm Bureau can offer besides expertise, noted Slipher and Drew, is to help organize support from other farmers.

“One of the most important things a county Farm Bureau can do is get people in the seats at county council or planning meetings,” Slipher said. “They just need to be there, make sure their presence is known and make sure those local officials know they’re there to support farmers.”