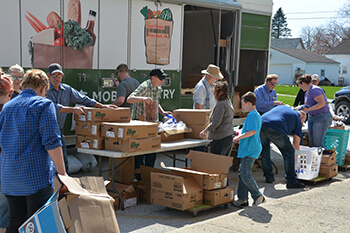 Farming and food have always gone together, but with its new program, Warren County Farm Bureau has made the connection even stronger.

Since January, the county Farm Bureau has sponsored and volunteered at Warren County’s mobile food pantry, which serves the towns of Pine Village and West Lebanon.

“Warren County is considered a food desert,” said Warren County Farm Bureau board member Steve Pithoud, who coordinates the program. “There’s only one grocery store in the county, and that’s in Williamsport (the county seat).” So when it was announced last year the mobile food pantry that operated outside Williamsport was going to cease operations, Pithoud thought something needed to be done.

“We needed to give the people in outlying areas a better chance of accessing the program and the nutrition it provides,” he said.

According to Feeding America’s “Map the Meal Gap” study, 10.4 percent of the population of Warren County — or 860 people — do not know where they will get their next meal. Fifty-eight percent of the people in the county make too much to qualify for assistance programs such as the USDA’s Supplemental Nutrition Assistance Program but struggle to make ends meet.

Therefore, Pithoud said, the county Farm Bureau board voted to dedicate money and time to “help improve access to food for the many poor and working poor of Warren County and reduce the level of food insecurity.”

The county partners with Food Finders Food Bank of West Lafayette, which addresses food insecurity in a 16-county area that includes Warren County. Food Finders provides the pantry truck and basic food items while Warren County Farm Bureau provides $500 in additional food, including fresh meat and vegetables, and much of the volunteer labor. Most of that money comes directly from the county Farm Bureau, but this spring it received a $1,500 county development grant from Indiana Farm Bureau. 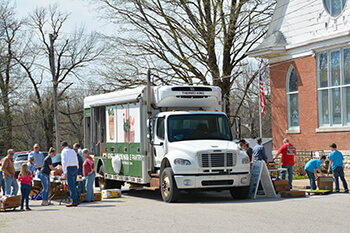 “It’s not a budget-busting program,” Pithoud added. “I cannot think of another way to positively affect this many people for such a reasonable cost.”

On the third Tuesday of the month, the mobile food pantry sets up either at Pine Village Methodist Church or the West Lebanon Fire Department and distributes food.

The first of those third Tuesdays was on Jan. 22, and the food pantry served 64 families. Participation has grown since, Pithoud noted, saying it’s not uncommon now to serve 120 families, almost all of whom are elderly, retired, disabled or the working poor.

“So many need the help and are truly appreciative,” he said.

Warren County Farm Bureau has budgeted $500 per month for the rest of 2019, and Pithoud said he expects the program to continue after that because it’s been so successful in helping people – and in heightening awareness of Farm Bureau in the community. Each month, 15-18 people volunteer at the pantry, and most of them are affiliated with Farm Bureau. Recently other groups have asked to volunteer and sponsor mobile food trucks as well, Pithoud said.

He added that anyone interested in finding out more about Warren County’s mobile food pantry program, or about food pantries in general, is welcome to call him at 317-403-3588.