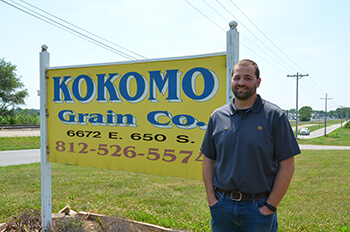 As most Hoosier farmers are now full steam ahead in this year’s harvest season, bins at grain elevators across the state are starting fill with the fruits of their labor. It’s during this time of year that Kokomo Grain Company, a grain marketing business headquartered in Kokomo, Indiana, does more than 50 percent of its business.

For Indiana Farm Bureau member Andy Fix, this busy time means daily research and calculation on factors of price fluctuation in the grain market. As the current grain originator at Kokomo Grain Company’s Edinburgh location, his primary role is to communicate with farmers and advise them on how to market their grain, whether it be corn, soybeans or wheat.

“With a 24-hour news cycle, first thing in the morning you’re going over what’s happened the night before,” he explained. Fix spends time discussing with farmers the different available options for grain production contracts: when to sell versus when to store in order to get the best price per bushel.

Kokomo Grain Company is a family-owned corporation that started in Kokomo in 1950 with a mere 12,000-bushel grain bin and feed store. The business is now a multi-location grain company with a 53 million-bushel capacity, with facilities in Amboy, Anderson, Burlington, Edinburgh, Emporia, Kokomo, Romney and Winamac, Indiana. 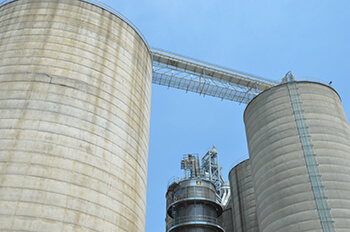 Every day, farmers bring semi loads of grain to the grain elevators, where samples from each truck are evaluated for moisture content, test weight, presence of foreign material and damage to kernels. These factors determine a grade for that grain, which ultimately affects the end price the farmer will receive. The grain is then stored there in a silo until it’s time for it to be shipped to a processor.

Once harvest ends, shipment of grain to processing plants begins to pick up. Soybeans typically leave by truck and are sent to a processor in Morristown, Indiana, while corn leaves by train (9,000 tons at a time) and ends up in Loudon, Tennessee. The grains are then processed into meals, oils, sugars and more.

“About half of the corn volume we do in a year happens between Labor Day and Thanksgiving,” Fix explained, “and about 75 percent of the beans we get annually come in during that period as well. On a busy day, we’re probably dumping 200 trucks a day.”