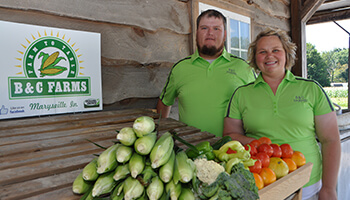 (Indianapolis) – June 4, 2018 – Indiana is home to more than 180 farmers markets, according to the U.S. Department of Agriculture. It’s prime time for farmers markets in Indiana as most markets open for the summer in early June.

Farmers markets, which serve as a link between urban and rural communities, are growing in popularity, both for consumers and farmers. In fact, USDA reported a 76 percent increase in total farmers markets across the country when comparing 2008 to 2014.

The appeal of farmers markets for many shoppers is no mystery. Consumers are increasingly interested in obtaining fresh, local meat and produce; and farmers markets give them easy access to local foods and local growers.

Casey and Ben Shireman, owners of B & C Farms in Marysville and Clark County Farm Bureau members, grow a large selection of vegetables and flowers through the spring and summer. They also grow pumpkins and ornamentals in the fall. The Shiremans sell their products at farmers markets in Jeffersonville, New Albany and Sellersburg and say that 75 percent of their farm income comes from farmers markets.

“Selling directly to the consumer cuts out the middleman, so we can get premium prices and control how the product looks because less handling means less damage,” said Casey Shireman. “Nowadays, consumers want to know where their food comes from, so we are able to be the face of everything we grow.”

Jonathan and Kelly Shannon, owners of Shannon Family Farms in Crawfordsville and Montgomery County Farm Bureau members, also rely on farmers markets as a key to their sales strategy. As a family, they raise grass-fed beef, pasture-raised pork, pasture-raised chicken and eggs. They’ve previously sold their products at the Crawfordsville Farmers Market, but this year they will be selling at farmers markets in Brownsburg and Waveland.

Jonathan Shannon says their most popular products at farmers markets are pork patties and anything out of the ordinary that you’d have trouble finding in a store such as chicken feet, soup bones for broth and pasture-raised lard.

The Shiremans also have had luck selling products that are less commonly found in the store or from other farmers.

“If we have several people asking for something that not very many people grow, we generally will try it a couple times to see if it is worth our while to plant moving forward,” said Casey. 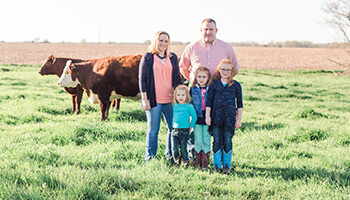 Shannon Family Farms recently opened a brick and mortar store called Four Seasons Market in Crawfordsville, with three other families, but prior to the opening of the store, farmers markets made up 100 percent of their sales. Their strategy allows them to customize their products for their customers.


“We are very focused on customer requests,” Jonathan explained. “We get many custom requests, such as non-GMO chicken, and we take the time to sit down with the customer and explain the differences to determine what it is that they really want.”

For the Shannons, the most common customer questions involve antibiotics, hormones, where their food is processed and their animal husbandry practices. Shannon says they’re happy to be able to have a conversation with their customers to answer their questions and explain their processes.

“Selling your product directly to a consumer allows you to form a bond, build a relationship and build trust with the consumer,” Jonathan said.

The Shannons also say that succeeding in this industry is about more than providing a quality product. They also monitor current food trends, especially any popular diets at the time, and identify how they can communicate how their products comply with those dietary restrictions.

“We keep up the various trending diets—right now it’s Whole 30 and the Ketogenic Diet— and we market towards it,” Jonathan explained. “We’ve even adjusted products to meet those demands, such as carrying bacon without any sugar in it.”

The Shiremans and the Shannons say if they could give some advice to farmers market shoppers, they would encourage them to do research, ask questions and get to know the farmers.

“Vendors want to talk and answer your questions,” said Jonathan. “Don’t think anything is a dumb question. If you don’t know, you should ask us.”

About Indiana Farm Bureau: Since 1919, Indiana Farm Bureau (INFB) has protected the livelihood, land, equipment, animals and crops of Hoosier farmers. It is the state’s largest general farm organization and a farmer’s strongest advocate. INFB works diligently to ensure a farmer’s very right to farm, because agriculture is so vital to Indiana’s economy.  Learn more at INFB.org.