“If it ain’t broke, don’t fix it” – or so the old saying goes. However, over the past few years, it became clear that the fundraising methods of Indiana Farm Bureau ELECT, the organization’s original political action committee, needed an overhaul. 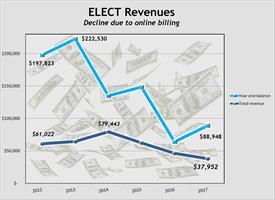 The problem, said Katrina Hall, INFB public policy director, and Dana Carter, INFB political engagement manager, came down to money: As a direct result of more efficient online billing by Indiana Farm Bureau Insurance, the funding provided through the voluntary $1 checkoff steeply declined. The board of directors raised the minimum contribution to $5, but revenue has not kept up with political contribution needs.

In addition, the contribution needs have increased over time as the number of political races INFB has become involved in has increased.

“Raising funds $1 or $5 at a time was simply not sustainable,” Hall said.

AgELECT, INFB’s new PAC, was created in response to this problem. Funded through contributions from members and also donations from non-members and corporations, AgELECT focuses on supporting state Senate candidates, state House of Representative candidates and state legislative caucus events.

Meanwhile, Indiana Farm Bureau ELECT will continue to focus on endorsements and donations at the federal level. That was its original purpose when it began in 1983 and made its first endorsements in 1988, so the creation of AgELECT means that, in a way, ELECT can return to its roots.