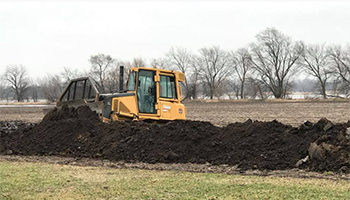 Significant rainfall in many parts of Indiana in late February and early March led to flooded farms. For the most part, farmers in northwestern and southeastern Indiana experienced the most intense flooding which put many counties under a state of emergency for several weeks.

Indiana Farm Bureau members in severely flooded areas had their work cut out for them as they quickly moved farm equipment and supplies to higher ground to avoid damage. This work went on for weeks in several areas as water continued to rise, especially near the Kankakee River Valley in northwestern Indiana.

Despite the hard work and stress of potential damage to their equipment, products and land, many Indiana farmers put their own needs aside to help their neighbors. 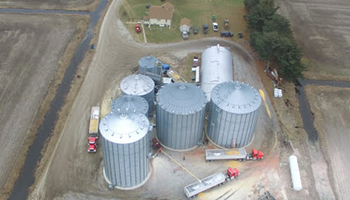 “I built a levee around a farmer’s grain bin with my excavator and another levee around my uncle’s farm,” explained Scarborough.

That’s no small task, especially considering he was dealing with some flooding himself.

Despite his own concerns, Scarborough stayed focused on his neighbors’ more pressing needs.

“There are some houses and farms around here that have it much worse than we do. I really haven’t done anything special. I’ve just been helping neighbors that need help and I’m sure if the water continues to rise that they will be at my farm helping me.”

And the rivers did continue to rise. Just a few days later Scarborough was the one receiving assistance from neighbors as the water crept closer and closer to his grain bins. The owners of Gorski Farms, the farmers Scarborough built a dike for earlier that week, returned the favor by helping haul grain out of the bins on Scarborough’s farm.

Scarborough is just one of the many farmers in Indiana who have helped their neighbors deal with the damaging effects of flooding.

Ryan and Marie Hilton, District 3 Young Farmer representatives from Jasper County, have been surrounded by water, but that hasn’t kept them from helping their neighbors one by one.

“Our levee broke on Tuesday or Wednesday one week and the river broke on Friday, and all we could really do was just get everything important out of the water,” explained Ryan Hilton.

Since then, the Hiltons helped neighbors evacuate homes, build a dike on a hog farm, empty a grain bin before flooding arrived, throw sand bags in a breach and much more.

“Local farmers and local community members along the river bank came together to help out. It was all hands on deck,” said Hilton.

“On Friday, we diked a road up to get to a neighbor’s hog barn so that they could get feed trucks up there and workers in and out. On Saturday, we helped a local guy whose grain bins are low-lying. We had 12 trucks hauling grain out to two elevators,” he explained.

After working most of the weekend, Ryan drove down the road to ask neighbors if they needed any help and Marie and some friends brought meals to folks as they worked.

Despite dealing with their own issues, they still say they have much to be thankful for.

“Other people have it worse off. When these things happen we have to come together as a community,” said Hilton.