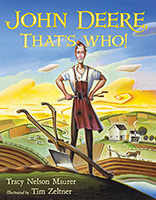 When John Deere moved from Vermont to Illinois in 1836, he made his living not as a farmer or inventor but as a blacksmith.

Once in Illinois, though, he saw how farmers struggled to turn heavy, sticky prairie soils with the cast iron plows designed for the sandy soil of New England. He became convinced that a plow that was properly polished and shaped could scour itself as it cut furrows. Using a broken saw blade, according to Deere & Company’s online history, he created such a plow in 1837, forever changing farming.

“John Deere [originally] had nothing to do with tractors,” Tracy Nelson Maurer, author of the children’s book John Deere, That’s Who!, told the American Farm Bureau Federation. “I thought kids would think that’s a fun fact. Maybe they’d want to know more: What exactly did this guy do? Why is he famous? That’s what this book answers in a fun way, and it shows how one determined and creative person influenced an entire nation.” 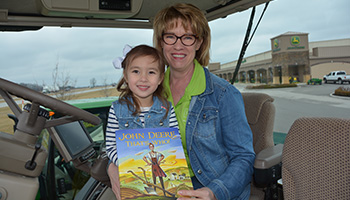 John Deere, That’s Who!, written by Maurer and illustrated by Tim Zeltner, is Indiana Farm Bureau’s 2018 Book of the Year. Promotion of the book began this spring, according to Isabella Chism, INFB 2nd vice president and chair of the Women’s Leadership Committee, but the campaign will push into high gear in September during Agricultural Literacy Week.

“Our goal is to extend our reach into more classrooms, schools, libraries and homes with a book that celebrates agriculture and the important role farmers play in feeding people in Indiana and around the world,” Chism said.

The book was chosen as 2018 Book of the Year by a panel of Farm Bureau staff and professional educators and endorsed by the INFB Women’s Leadership Committee. The annual Book of the Year selection is a part of INFB’s Agriculture in the Classroom program, whose purpose is to increase understanding and awareness of Indiana agriculture in kids in grades pre-K-12.

INFB launched its Book of the Year program in 2017 with The Kid Who Changed the World by Andy Andrews, which features four of agriculture’s important figures: Norman Borlaug, Henry Wallace, George Washington Carver and his adoptive mother, Susan Carver.

As part of the campaign, INFB has prepared an educator guide, which is available for download on the organization’s website in the Classroom Center.

The books are available on AFBF’s website in the Shop section.

“We get enough for all our county’s elementary school libraries and public library branches,” she said, as well as some day cares and programs that provide books to kids in the hospital.

She added that she thinks the book is valuable for all kids, especially those who have no knowledge of agriculture.

“It’s not just kids who need to be informed,” she said. “That’s why we need to put these books out – to inform the kids, to inform the public.”

LaGrange County is getting 15 copies, which it will donate to school libraries, county book mobiles and each branch of the county library.

“We’ve had a lot of great feedback (from the 2017 Book of the Year), so the county board decided to do that again,” she said. The libraries “so much appreciated that book from last year, and we appreciate the fact that it gets the farm-to-table message out there.”