The impact of agriculture in Indiana, celebrated on National Ag Day 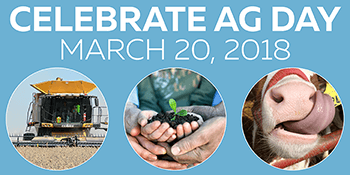 According to the United States Department of Agriculture, agriculture currently supports more than 107,000 Indiana jobs, ranging from crop and livestock farmers to agricultural engineers and soil scientists.

The USDA also reports that Indiana ranks 11th in the nation in agriculture sales, contributing an estimated $31.2 billion in sales to the Indiana economy each year. Roughly $10 billion of those sales are of actual agriculture products sold by Indiana’s farmers, such as crops and meat and dairy products. Those products don’t all stay in the state. More than $4.6 billion of agricultural products are exported around the world.

Indiana’s farmers are known for their production of corn and soybeans, but Indiana agriculture is diverse. In fact, according to the USDA’s national ranking, Indiana is ranked fifth nationally for corn (for grain) and soybeans, but the state also ranks:

“Corn and soybeans remain the leading sources of income for Indiana farmers, but if I’ve learned anything from traveling to all 92 counties to meet with farmers, it’s that Indiana agriculture is incredibly diverse,” said Randy Kron, INFB president and Vanderburgh County farmer. “Most folks don’t think of mint, popcorn, blackberries or watermelon farms when they think about agriculture in Indiana, but they should because our farmers produce a vast variety of products.”

INFB represents more than 72,000 Hoosiers that are involved in agriculture.

“In Indiana, nearly all farms are family owned and operated,” explained Kron. “Those families, many of whom are INFB members, are responsible for the significant impact agriculture has on our state’s economy. They make up one of Indiana’s strongest industries.”

To celebrate this year’s National Ag Day, individual county Farm Bureaus across the state host community events of all kinds. The majority of events are focused on educating elementary school children about the importance of agriculture in Indiana.

About Indiana Farm Bureau: Since 1919, Indiana Farm Bureau (INFB) has protected the livelihood, land, equipment, animals and crops of Hoosier farmers. It is the state’s largest general farm organization and a farmer’s strongest advocate. INFB works diligently to ensure a farmer’s very right to farm, because agriculture is so vital to Indiana’s economy.  Learn more at INFB.org.