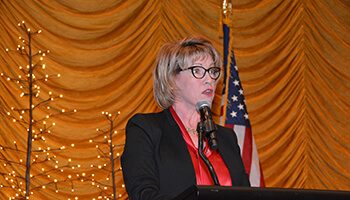 Before the election, each candidate was given five minutes to address the delegate body. Chism highlighted responsibilities in her role, efforts to execute the organization’s strategic plan and successes she has had as second vice president.

“It is a privilege to serve alongside each of you telling our farm story,” Chism said during her speech. “I would like to continue to work with you to put action to our vision and keep this momentum going and growing.”

Chism was first elected to the role of INFB second vice president in 2006. In her acceptance speech, she said this re-election felt like a vote of confidence from INFB members. After the election, Chism said she looks forward to connecting with members who didn’t vote for her to hear their recommendations for the organization.

“I know that there are different points of view, and I would like to know what the members who didn’t vote for me would like to see happen,” Chism said after the election. “I would love to be able to work with everyone to form a unified voice for agriculture.”

In addition to her role at INFB, Chism serves as the vice chair of the American Farm Bureau Women’s Leadership Committee and as the vice chair of the board for the Agriculture Council of America. Chism and her husband, Kent, farm in Howard County where they raise corn, soybeans and sweet corn. They have three grown children, all of whom are married with children.