Note to editors, news directors: The release below should be of particular interest to media who cover Washington County and the vicinity. 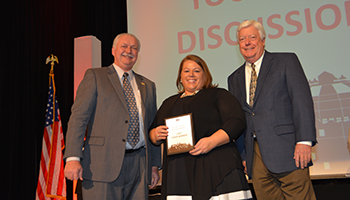 (Indianapolis) – December 11, 2017 – Deidra Gottbrath is the winner of the 2017 Indiana Farm Bureau Young Farmer Discussion Meet. The competition, which was held Dec. 8 and 9 in French Lick as a part of the INFB state convention, is one of the three major awards presented to Farm Bureau members age 35 and younger. In it, contestants participate in a group discussion that simulates a committee meeting.

Gottbrath and the other finalists and participants discussed common dilemmas and potential problems facing farmers in America, such as: 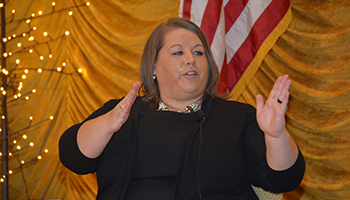 Gottbrath will now advance to the national Young Farmer & Rancher Discussion Meet, which will be held during the American Farm Bureau annual meeting, Jan. 6-9 in Nashville, Tennessee. She has a full-time job as a stroke clinical operations nurse at a large hospital in Louisville, Kentucky. She also farms with her parents and is president of the Washington County Farm Bureau.

As winner of the INFB Discussion Meet, Gottbrath received a $4,000 cash prize from Indiana Farm Bureau Insurance and expenses paid to the national convention in Nashville.

Also announced at this year’s state convention was the 2018 INFB State Young Farmer Committee. The 2018 committee, by district, is as follows


About Indiana Farm Bureau: Since 1919, Indiana Farm Bureau (INFB) has protected the livelihood, land, equipment, animals and crops of Hoosier farmers. It is the state’s largest general farm organization and a farmer’s strongest advocate. INFB works diligently to ensure a farmer’s very right to farm, because agriculture is so vital to Indiana’s economy.  Learn more at INFB.org.