Note to editors, news directors: The release below mentions many different county Farm Bureaus, but it should be of particular interest to media that cover Benton, Boone, Jennings, Wayne or Whitley counties.

During the program, this year’s Impact Award winners were named. The Impact Award recognizes county Farm Bureaus for efforts that result in a significant impact or an increase in political influence and clout. This year’s winners were honored for achievements in the categories of image awareness and membership experience. 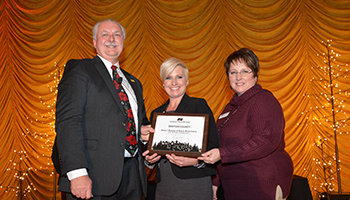 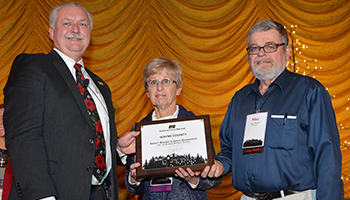 Wayne County for its Summer Harvest Supper. The county Farm Bureau educated citizens in the county’s urban community about food, fiber and fuel. The supper served as a way to connect farmers and consumers. Among attendees were physicians, nurses, elected officials, educators and business owners. 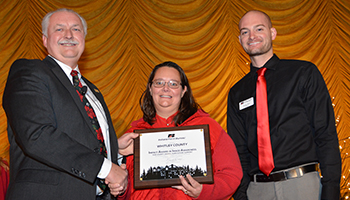 Whitley County for its campaign to support county agriculture. An opposition organization in the county opposed the construction of new confined feeding operations (CFOs) in Whitley County. The county Farm Bureau mobilized to distribute more than 300 t-shirts and 400 yard signs throughout the county with the “Support County Agriculture” message. The county Farm Bureau was also able to get more than 150 supporters to attend county commissioner and board of zoning appeals meetings on the CFO subject. Both proposed CFOs received their building permits. 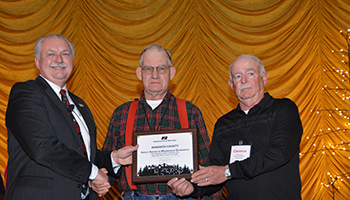 Jennings County for its effort to rebuild the shelter house at the North Vernon City Park, home of the Jennings County Farmer’s Market. The previous shelter was condemned for structural reasons. The county Farm Bureau was instrumental in starting the farmer’s market in 1998, which fueled their determination to rebuild the structure. 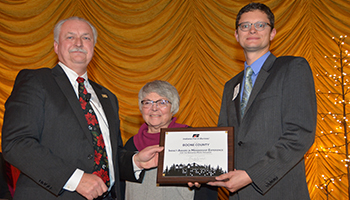 Boone County for its Growing Hope program in partnership with Love INC, which stands for Love in the Name of Christ. In the joint program, one farmer donates land for the season, which is planted with either corn or soybeans. Then, Farm Bureau volunteers tend and harvest the field. The crops goes to an elevator while the proceeds go to Love INC. Boone County Farm Bureau has participated in this event for more than four years and has raised nearly $65,000 for Love INC to date.

INFB also announced counties who reached gold status for the County Recognition Program. INFB’s County Recognition Program was developed six years ago to recognize contributions to the organization. This year’s categories for consideration included image awareness, membership experience and membership. Counties earn bronze or silver status in each category based on predetermined requirements for the program year. If a county received silver status in all three categories, they were awarded gold status. This year, 52 counties achieved gold status.