Unless Congress acts on legislation to promote fair competition between Main Street retailers and internet-only sellers, states will lose more than $211 billion in tax revenue over the next five years, according to new analysis released by the Marketplace Fairness Coalition.

Without a federal solution, Indiana will lose more than $3.8 billion from 2018-2022, the coalition said. 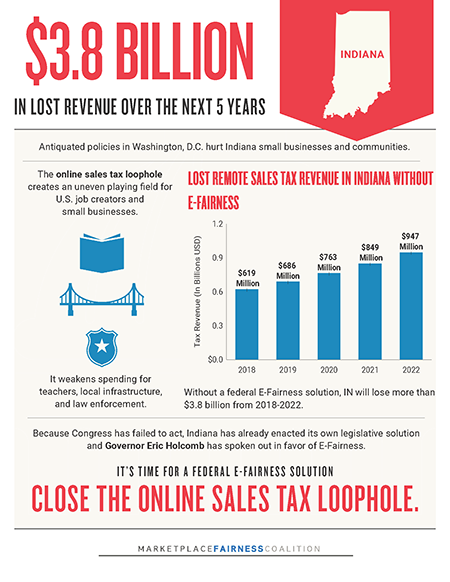 Currently, a legal loophole allows some online retailers to avoid collecting the sales tax due during a transaction. While consumers are still liable for paying what’s owed, few do, which gives online stores a strong advantage over their Main Street competitors.

One of farmers’ and ranchers’ biggest concerns about the lack of fair competition between brick-and-mortar stores and internet-only sellers is that local governments and schools often try to make up for the lost sales tax revenue by increasing property taxes, a burden that falls heavily on land-based business owners.

The American Farm Bureau Federation is backing two bills, the Remote Transactions Parity Act of 2017 (H.R. 2193) and the Marketplace Fairness Act of 2017 (S. 976), that would allow states to apply sales tax laws uniformly.

“The businesses that line the streets of our nation’s small and rural towns provide essential goods and services to the farmers and ranchers who work the fields that surround them,” AFBF President Zippy Duvall said in a letter to House and Senate lawmakers encouraging them to support the bills. “But hometown businesses are at a disadvantage when they compete with online-only retailers who don’t have to collect sales taxes. When this disadvantage causes a ‘Main Street’ business to close or scale back, the impact is especially hurtful to already struggling small and rural towns.”