When Robert Wimsatt (pictured at right) was the general manager of a company that supplied fruits and vegetables to grocery stores in Indiana and Kentucky, “mum” was definitely the word. 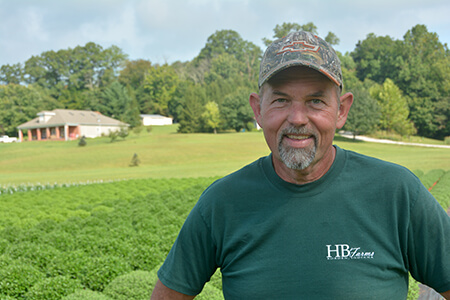 That was the inspiration for Wimsatt’s farm, HB Farms & Greenhouses, which grows and sells tens of thousands of mums each year. This year he planted nearly 90,000 mums on his 13 acres, located near Borden, Indiana.

In 2000, Wimsatt closed his family’s produce business, Harshfield Brothers, after Kroger bought up the company’s biggest customer and he “saw the writing on the wall.”

He had always enjoyed flowers, taking horticulture classes while in high school.

“When my family business closed, I'd worked my tail off for 20 years for that company, and I'd taken very little vacation time,” he explained. So in the summer of 2000, in spite of some skepticism from his wife, he decided to delay finding full-time work and instead grow and sell mums, pumpkins and a few vegetables.

It went well, he said – so he went a little bigger the next year. 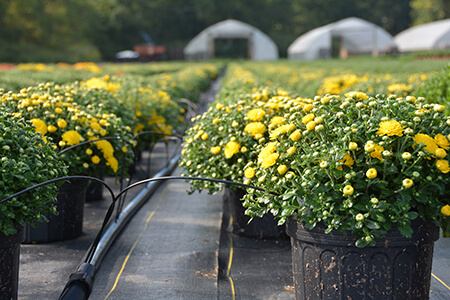 And he has made it work. Since 2000, HB Farms has increased sales by 10 percent every year but one.

Most of HB Farms’ flowers are sold wholesale to around 100 different accounts, such as small and medium-sized store chains, and to groups that sell them to raise money. A few are sold direct to consumers, particularly people on their way to Huber’s Orchard and Winery, a nearby agri-tourism destination.

HB Farms produces other things besides mums, including perennials and annuals. Its No. 2 crop is petunias. The farm produced 35,000 petunia baskets this year. 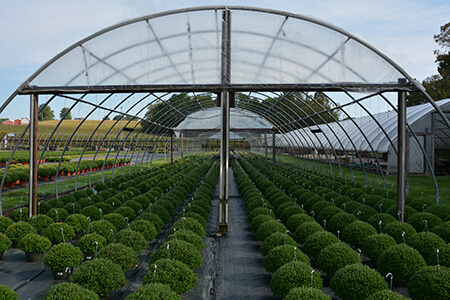 The mums and petunias share one unusual characteristic: They’re grown outside, first in “cold frames” (open, unheated greenhouses) before they are moved in their pots to an open field. (See photo.)

“To see petunias growing out in a field, a lot of people think I'm crazy,” Wimsatt said. This method makes the plants very resistant to cold. When the temperature dropped to 29 degrees this past spring, he had a field of petunias but didn’t lose any plants. The downside is that he can’t get crop insurance on his flowers because they’re grown outside of a greenhouse.

But according to Wimsatt, it’s worth it.

“Something about the dew, the cool mornings” produces mums that are hardier and also prettier, he said.

“I've actually grown mums under plastic before [but] the color's not as rich, the foliage's isn't as green, and it's not as nice a mum.”

Find out more about HB Farms & Greenhouses at hbfarmsgreenhouses.com.