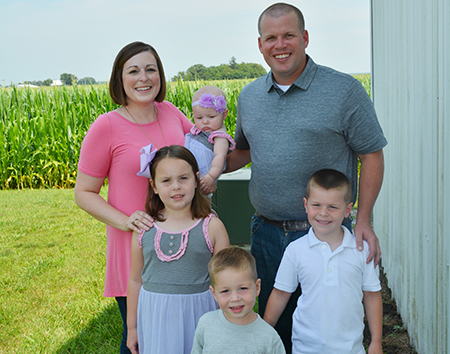 Jeff Demerly worked outside of agriculture when he first got out of Purdue – and he enjoyed it, too. But he realized he was still yearning to get closer to his farming roots. That’s why eight years ago he and his wife, Jenna, moved back to his hometown of Wolcott (not far from where his father still farms) and started their own business, Demerly Ag Plus, where they sell, service and promote DuPont Pioneer products and provide general profit consulting and crop insurance risk management. (Jenna and Jeff Demerly with their children Adalynn, Archer, Austin and Amelia). 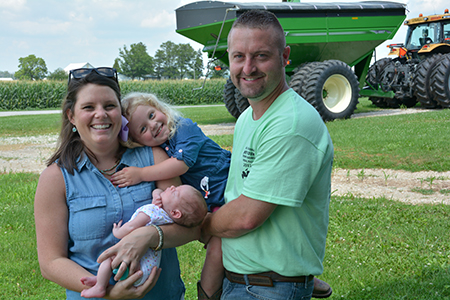 Matthew and Brianna Chapman farm with his brother, Jacob, and together they raise corn, soybeans, wheat, pigs “and kids,” Matthew said. He and Jacob have formed a partnership in order to buy the farm so their father can retire. Matthew’s responsibilities include purchasing inputs, marketing, planting, spraying and crop scouting, and he oversees his father’s hog operation. In addition, Matthew has a custom trucking business, and Brianna owns two retail flower shops. (Brianna and Matthew Chapman with their daughters Grace and June.)