(Indianapolis) – August 8, 2017 – Jeff Demerly of White County and Matthew and Brianna Chapman of Henry County are the winners of two of Indiana Farm Bureau’s top awards for young farmers in 2017, the Achievement Award and the Excellence in Agriculture Award.

Two distinguished panels of judges evaluated this year’s participants. Achievement Award candidates were judged on their leadership abilities and on what they have achieved with their farms, while Excellence in Agriculture candidates were judged on their involvement in agriculture, leadership ability and involvement and participation in Farm Bureau and other organizations. 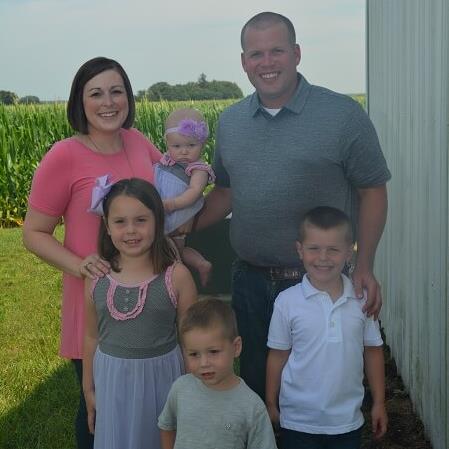 Jeff Demerly grew up working on his family’s row crop farm and was actively engaged with FFA and 4-H. After graduating from college, he became removed from farming, but a few years later, he felt the pull to rejoin the ag industry. With the help of his wife, Jenna, he created his own agricultural retail business, Demerly Ag Plus. Their business sells, markets and promotes seed inputs, as well as crop insurance risk management and general profit consulting.

He is also an active White County Farm Bureau member.

“I started my experience with Indiana Farm Bureau through the Young Farmer program,” said Jeff. “It didn’t take long for me to grab onto every opportunity I could within the organization. I moved into a variety of roles and became vice president for a year and I now fill the role of president of White County Farm Bureau.”

Matthew and Brianna Chapman both majored in agriculture in college and have been focused on excelling in many aspects of the agriculture industry ever since. Matthew is a third generation farmer. He and his family farm corn, soybeans and wheat in Henry County and manage two swine barns all while owning a commercial trucking company. Matthew works full time on the farm while Brianna operates two retail flower shops. 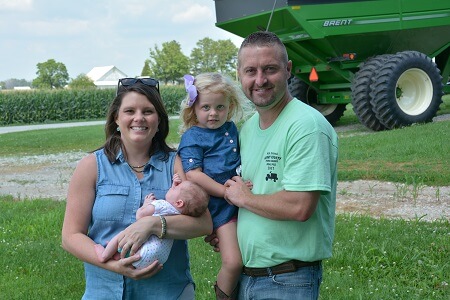 “After we graduated from Purdue, we started a Young Farmer program in Henry County and we tried to get really involved in our county Farm Bureau,” said Matthew.
“We made friends at the state Young Farmer convention and decided to be Young Farmer reps for the state. We did that for two years and we made friends for life.”

He explained the struggle many family farmers face as they attempt to expand the farm to incorporate children or additional family members.

“For every young farmer, it can be difficult to find your way and expand the farm so that you have an income to come back to,” explained Matthew. “Any young farmer needs to be creative in the ways you diversify your operation.”

These state awards are conducted as a part of the American Farm Bureau Federation Young Farmers and Ranchers Award competition. Demerly and the Chapman’s will represent Indiana in AFBF’s Young Farmer & Rancher Achievement and Excellence in Agriculture competitions at the AFBF Annual Convention in January in Nashville, Tennessee. They will compete against young farmers and ranchers from across the country.

Winners and finalists will be formally recognized at the INFB state convention in December.


About Indiana Farm Bureau: Since 1919, Indiana Farm Bureau (INFB) has protected the livelihood, land, equipment, animals and crops of Hoosier farmers. It is the state’s largest general farm organization and a farmer’s strongest advocate. INFB works diligently to ensure a farmer’s very right to farm, because agriculture is so vital to Indiana’s economy.  Learn more at INFB.org.