Once upon a time, before combines and mechanical corn pickers were readily available, the most common way to get corn out of the field was to pick it by hand in a process known as “corn husking.”

It’s been decades since most U.S. farmers harvested corn this way, but every year, the Indiana Corn Husking Association sponsors a contest that honors the state’s ag history and crowns Indiana’s top corn huskers.

“It's a good family event,” said Clay Geyer, the Bremen farmer who is president of the association. "We just keep growing a little each year,” he added, noting that typically 100 or more people compete and perhaps as many as 250-300 come to watch.

"We get new huskers every year," he added.

It’s called “husking” rather than “picking” because participants pick ears but leave most of the silks and husks behind. The goal is to pick the corn as fast as possible and then toss each ear into a wagon. Contestants receive deductions for leaving too many husks on the corn and for leaving too many ears in the field. 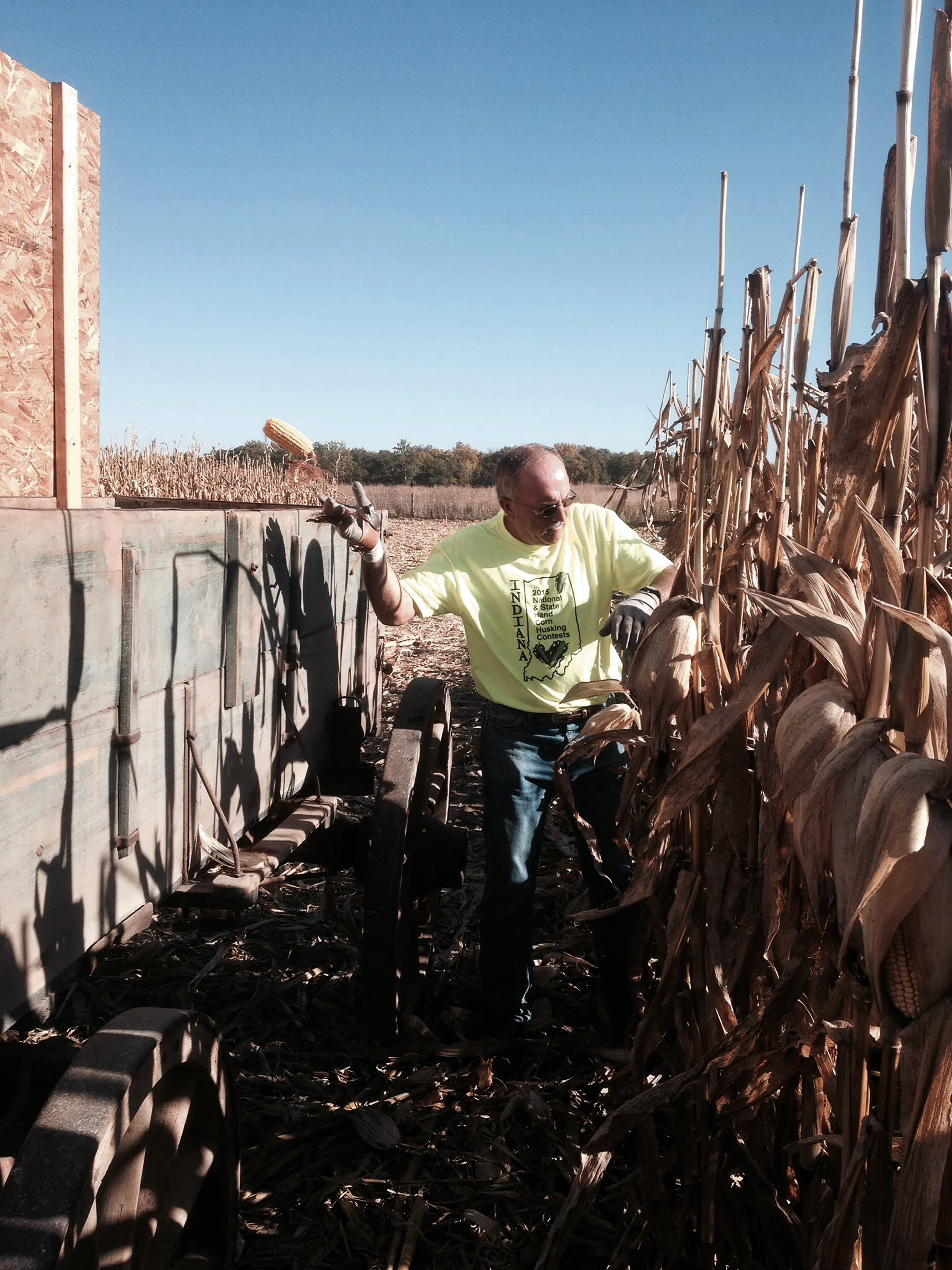 As each contestant starts picking, he or she is accompanied by a wagon pulled by either a tractor or a team of horses. Standing upright in the wagon is a “bang board,” designed to prevent huskers from throwing ears over the wagon. As each ear is tossed into the wagon, the husker and the spectators can hear it hit that board. A really good husker can pick and husk an ear in a little over a second.

“You get an idea of where the wagon is and you don't look at the wagon – you're looking at your next ear, and you're snapping them off and popping them in,” Geyer explained.

Last year’s overall state winner was Mike Geyer of Bremen, with an official total (after deductions) of 440.46 pounds in the regulation 20 minutes. Herman Stutzman of Plymouth was runner up with 432.87 pounds, and Kevin Lambright of Hudson placed third with 404.5 pounds.

The contest offers a variety of age- and gender-based classes – everything from girls or boys 14 and under to “Golden Agers” classes (ages 75 and up) for both men and women. The top three in each class win cash prizes, gift cards and other promotional swag from area businesses.

Jerry and Phyllis Calloway of Macy head up a crew of huskers consisting of four of their grandchildren.

They first got involved when Jerry drove his team of Percherons in the state contest, but eventually Phyllis started husking, winning her division her very first year. Then last year, Jerry stopped driving his Percherons long enough to husk, too, coming in second in his division.

Four of the Calloway’s grandchildren also compete: 23-year-old Lane Eckrote, 16-year-old Marshall Finke, 15-year-old Cora Burns and 13-year-old Kane Finke. When asked why they decided to compete, Lane, who farms full-time with his parents, said he values the old-time aspect of the contest and finds the overall experience enjoyable.

“And it gets me out of the combine for a day,” he added.

“I thought it would be fun, and it is fun,” Cora explained.

For Marshall, the first incentive to participate was helping his grandfather with the horses at the 2015 contest.

“It really kind of introduced me to a new world of harvesting corn,” he said.

“I just think it’s something that’s old, and that stuff should be preserved,” Phyllis said. "It's something to look forward to in the fall.”