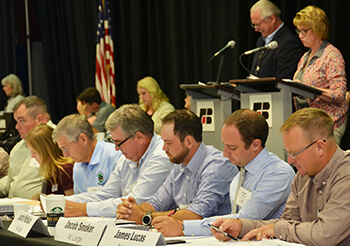 (Indianapolis) – August 27, 2018 – Indiana Farm Bureau member delegates gathered at the Hendricks County Fairgrounds on Saturday, Aug. 25 to determine the policy positions of the organization for 2019.

The delegate body consisted of 262 members with representatives from each of Indiana’s 92 counties. The members discussed a number of issues including local government structure, annexation, transportation, utilities and issues related to trade.

“The policy development process is a cornerstone of Farm Bureau,” said Randy Kron, INFB president. “Our member delegates are passionate about issues impacting agriculture, and they work hard to craft policy positions that are actionable at the local, state and federal level.”

INFB’s policy creation process begins at the local level. Each year, all counties have the opportunity to make policy suggestions or edits. Then, those suggestions are debated by a resolutions committee before being brought to the full delegate session. The grassroots structure is vital to ensuring that INFB members can voice their opinions.

“Each voting member has the opportunity to share their views when it comes to policy,” Kron said. “Farmers are facing a lot of issues right now including trade barriers, commodity surpluses and a down farm economy. It’s critical that we have policy positions that will help the organization advocate for solutions to these concerns.”

In response to continued concerns about the current trade climate, delegates supported an addition to the policy book that clearly states opposition to trade restrictions that may lead to retaliatory actions against U.S. agricultural exports.

“We heard a lot of conversation about local control and local government in this year’s delegate session,” said Katrina Hall, INFB director of public policy. “It is evident that a majority of Farm Bureau members support local control when it comes to issues like township government, planning and zoning, and wind and solar energy projects. Several of our members are in the midst of solar and wind discussions at this time.”

Delegates adopted language that supports the voluntary merger of townships as long as there is a clear plan for the process. Members support the concept that a plan should be made available to the public before it goes to a referendum and should include detailed information about the services provided before and after the merger as well as the property tax implications.

During the session, delegates also voted on members who would represent INFB at the 2019 American Farm Bureau Federation Convention. The AFBF Convention will be held in New Orleans in January. The INFB delegates chosen will discuss policy positions for the national organization with representatives from all 50 states and Puerto Rico. Four county Farm Bureau presidents were elected as delegates for the AFBF Convention:

Over the next few weeks, the INFB board of directors will determine the priority policies for the 2019 state legislative session. Federal priorities are set at the AFBF level based on input from all state Farm Bureaus. Now, the INFB public policy team will work with regional managers, district directors and county Farm Bureau members to hone in on top priorities to set the stage for the organizations efforts at the Statehouse and in Washington, D.C.