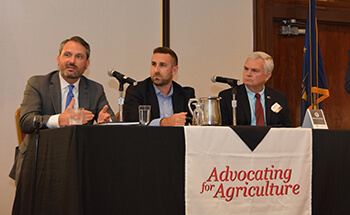 Roger Hadley, Allen County Farm Bureau president, said he began to take a real interest in agricultural policy in 1988 when he was the DuPont Young Leader for the American Soybean Association. He said he was looking forward to this opportunity to stay informed on the issues facing agriculture.

“There are a lot of things happening with ag policy right now, especially with the trade war going on,” Hadley said. “I wanted to see what was on everybody’s radar and see what they were focusing on.”

During lunch, attendees shifted their attention to national matters. John Newton, American Farm Bureau Federation’s director of market intelligence, briefed members on the farm economy. Much of Newton’s presentation was centered on the proposed soybean tariffs from China, which went into effect on July 6.

The second half of the conference featured two more panels that discussed rural issues. First was a panel on advocating for rural broadband with Scott Bowers, vice president of government relations at Indiana Electric Cooperatives; Rick Kelley, Brown County Farm Bureau president; and Ryan Heater, legislative director at the Office of the Lieutenant Governor (pictured above).

“I’m always interested in hearing about broadband,” Hadley said. “Even though they say we have decent access out here, either I’m not buying the right one or we don’t have the right upload speeds. I was interested in learning what progress we might be making there.”

The final panel discussion was about the efforts in rural education to prepare students for the workforce. Participants in that panel included Rebecca Schroeder, a member of the Governor’s Workforce Cabinet; Mary Roberson, superintendent at Perry Central Community School Corporation; and Chris Lagoni, executive director at the Indiana Small and Rural Schools Association.

Hadley urges members who have an interest in policy to attend the Ag Policy Outlook Conference next year if their schedule allows.

“It’s a good resource to see what’s in the skillet and what’s getting ready to be served up,” he said. “It gives us a jump start on the next legislative season.”