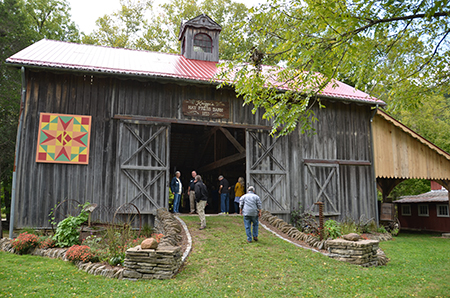 Casey Knigga acquired his hay press barn almost by chance. In 2003, he was in the market for an old log cabin, and his plan was to reconstruct and restore it on his property in Ohio County for use as a hunting cabin.

“A cabin next to the creek, in the woods – that was the plan,” he said.

Then he ran across someone who told him that an unusual structure known as a hay press barn was for sale. Even though a barn wasn’t at all what he was looking for, he decided to take a look anyway.

The centerpiece of the barn is the hay press, a three-story stationary mechanism called the Hewitt, Beater and Mormon press, invented in 1843 by Samuel Hewitt of Switzerland County. It took two or three attendants and a mule or horse to operate, and it can produce bales weighing 300 pounds or more.

At one time there were between 200-300 hay presses throughout Ohio and Switzerland counties, Casey said, but his barn, which was built in 1853, is one of only seven left. And not all of those remaining are operational.

The hay press barn that so impressed Casey was on property the owner was planning to develop, and he therefore wanted to sell the barn and get it moved. 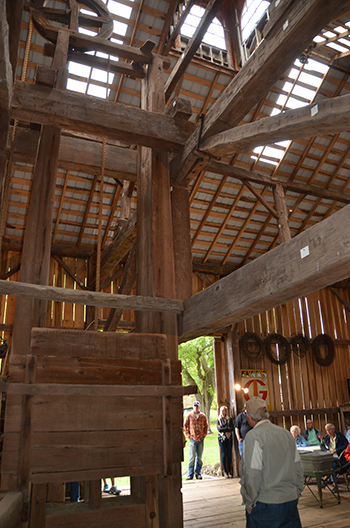 “Soon we negotiated a deal which included clean-up of the site, and the barn was mine!” Knigga wrote in his application to have his barn registered as a “Bicentennial Barn.”

The plan, he said, was to restore the barn as close to original as possible. It took approximately two weeks to take the structure down, including the 80 tons of foundation stone, and each piece – all 300 of them – was tagged. Lots of photos and video were shot as well to aid in reconstruction.

He then stored the barn for nearly two years. Groundbreaking started in fall 2006 and by spring 2007, the structure was 90 percent complete. Some key components were missing and had to be designed and manufactured, and new exterior lumber was needed since the original was in such poor condition.

Casey isn’t a farmer – he is the owner of Casey’s Outdoor Solutions and Florist (a landscaping and gardening center in Lawrenceburg) – but one of the gratifying parts about this project is that some of his 450 acres were farmed by some of his ancestors.

As for that log cabin he was originally looking for, Casey’s become something of a collector of old buildings. He actually has another hay press barn in storage, and he’s acquired a total of four log cabins, all awaiting reconstruction.

Eventually he’d like to reconstruct an entire village on the property – schoolhouse, church, weaving shop and so on – circa 1850-1870. He’s considering forming a non-profit 501(c)(3) corporation for this purpose. (Anyone who knows of a historic structure that might be available is invited to email Casey.

“I don’t know that it will ever be a money-making thing,” he said, “but I hope it will be a sustainable thing.”

He added, “I hope we can preserve these [buildings] so they’ll last at least another 100 years.”