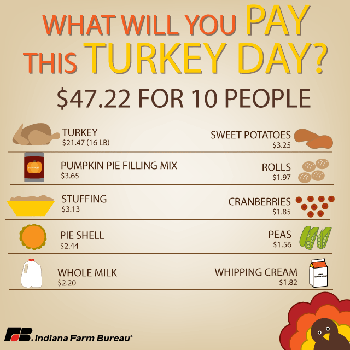 (Indianapolis) – November 15, 2018 – According to Indiana Farm Bureau’s annual Thanksgiving market basket survey, Hoosier shoppers should expect slightly more affordable grocery store prices on traditional Thanksgiving food items this year. The average cost for a Thanksgiving dinner for 10 this year, including 12 traditional food items, is $47.22 or $4.72 per person, which is approximately 7 percent cheaper than in 2017.

The INFB Thanksgiving market basket survey was conducted by volunteer shoppers across the state who collected prices on specific food items from one of their local grocery stores. Volunteer shoppers are asked to look for the best possible prices, without taking advantage of special promotional coupons or purchase deals.

The market basket price of $47.22 includes a 16-pound turkey, the ingredients for stuffing and a pumpkin pie, sweet potatoes, rolls, peas, a carrot and celery veggie tray, whole milk, cranberries, whipping cream and miscellaneous baking items such as eggs, sugar and butter.

The majority of the 7 percent decrease in price can be attributed to a lower cost of turkey this year.

“Thanks to an ample supply, turkey remains affordable for consumers, which helps keep the overall cost of the dinner reasonably priced as well,” said AFBF Chief Economist Dr. John Newton.

Other traditional Thanksgiving items that Hoosier shoppers can expect to be a bit more affordable this year include fresh celery, fresh cranberries and whipping cream.

Items that may be a bit more expensive this year include cube stuffing, pumpkin pie mix, pie shells and fresh carrots. All other items, including sweet potatoes, dinner rolls, peas and milk, remained relatively unchanged.

To capture the diversity in Thanksgiving meals across the U.S., INFB also collected prices for less traditional Thanksgiving items and found that consumers can expect to pay $9 for a 4-pound ham, $1.56 for a 16-ounce package of green beans and $2.80 for a 5-pound bag of russet potatoes. The addition of these items increases the overall meal cost for 10 to $61.23.

“The good news is that consumers continue to see affordable prices for traditional Thanksgiving foods at the grocery store, including the turkey, which is even more affordable than in year’s past,” said Isabella Chism, INFB 2nd vice president and chair of the women’s leadership committee. “Indiana ranks fourth in the nation in turkey production.”

Indiana’s survey is completed in conjunction with a national survey administered by the American Farm Bureau Federation. AFBF found that the national meal average for 10 people is $48.90, which is approximately 4 percent more than Indiana’s average meal price this year. A total of 166 volunteer shoppers in 37 states participated.

Shoppers with an eye for bargains in all areas of the country should be able to purchase individual menu items at prices comparable to the Farm Bureau survey averages.

About Indiana Farm Bureau: Since 1919, Indiana Farm Bureau (INFB) has protected the livelihood, land, equipment, animals and crops of Hoosier farmers. It is the state’s largest general farm organization and a farmer’s strongest advocate. INFB works diligently to ensure a farmer’s very right to farm, because agriculture is so vital to Indiana’s economy.  Learn more at INFB.org